We are delighted to welcome Mireille and Antonio to the team.

Interior fitting work has begun at the EgoKiefer SA site in Villeneuve. Work should be completed by July 2019.

Article in ‘Le Régional’ about the renovation and extension of the Paudex school complex:

Plans to renovate and extend the building announced. Refurbishment work will include the municipal offices, community hall and school. Built in 1968, the school is in serious need of a facelift.

CHF 10.5 million in total, with CHF 9.5 million in the form of a loan. That’s a lot of money for a small municipality, but vital given the scale of the project and its importance to the community. The plan is to renovate and extend the municipal offices, community hall and school, and to build a new single-storey multi-purpose annex. The creation of a new space for junior firefighters is also planned, along with public WCs.

Time has taken its toll

When the site was originally constructed in 1968, the architect, Hubert Reymondin, envisaged a centre complete with a school, municipal offices, community halls and even an ecumenical chapel. It took two years to build and deliberately left room to spare: Paudex, which numbered 1,131 inhabitants at the time, was expected to grow. It did grow, but not as rapidly as expected. Today, more than 50 years later, the population of Paudex is just under 1,400. The idea of leaving room for growth was sound and meant that Paudex was able to cope with a larger population, but the buildings are starting to show their age. And teaching and school equipment has changed too.

In 2015, an initial plan to renovate the primary school and extend the municipal offices was proposed. Five designs were submitted, with the proposal from schmid architectes finally chosen. In 2016, a second project for the renovation, conversion and insulation of the primary school, the community hall and administrative building was added. It was designed to meet current building standards. Further additions included a multi-purpose annex with an accessible roof terrace facing the sports area, a children’s cafeteria, a mid-sized conference room, a small kitchen, a changing room and WCs, including disabled facilities. With the survey work now complete and tenders opened, the time to start work, and spending, has arrived. And it’s this CHF 10,543,000 budget that the municipal council will put to the vote on 12 February. The municipality has only CHF 1,043,000 for this project. The balance must be borrowed for a period of 30 years. 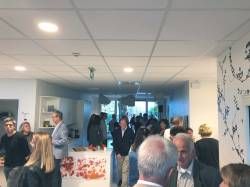 The crèche-nursery in Saint-Légier has now opened. It provides daycare for infants and toddlers under one roof. As the architect, our job was to demolish the old changing rooms by the football pitch and put up a new building. The plot shape, surrounding roads and streets and many trees in the area led us to create a highly contextual design. The result is a resolutely dynamic and contemporary building. We wanted to create a place that is warm and welcoming, safe and user-friendly, with spaces that have a domestic feel. The site encouraged us to create a strong dialogue between the garden and the indoor areas through a south-facing aspect, large windows and spacious terrace.

The renovation of Building F and the construction of the crèche-nursery featured in Prestige Design Magazine. 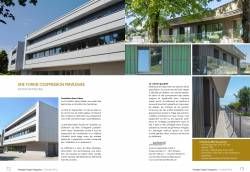